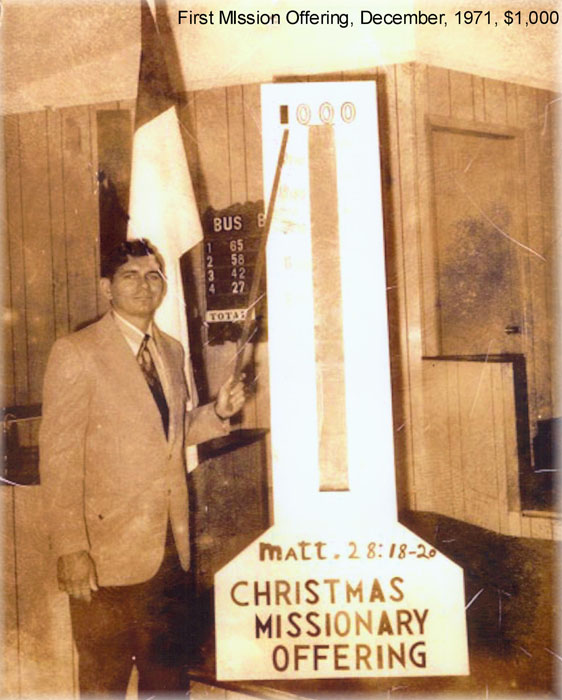 Landmark Baptist Church began as the First Missionary Baptist Church founded by Bill Edmonston in November of 1958. The first meetings were held in the local VFW. God blessed the church, and in July of 1959, they moved into their own building with 50 charter members. The Lord called Pastor Edmonston to another work and during the next ten years Jimmy Walker and then Paul Crouch served as Pastor. In 1967, Pastor Edmonston returned and the following year a new auditorium was completed. In the fall of 1970, the Lord led Pastor Edmonston to take a church in Tallahassee.

On Wednesday night, December 23, 1970, Mickey Carter was unanimously voted as Pastor. On Pastor Carter's first official Sunday, January 3, 1971, the Sunday school attendance was 37. (To read Dr. Carter's full account of how God called him and Sonja to Landmark Baptist Church click on the "Our Pastors History" button below)

In the late summer of 1972, the decision was made to start a Christian day school. Just a few weeks later, the school opened in classrooms adjacent to the east side of the main auditorium, with approximately 30 students from kindergarten through 3rd grade.

With attendance growing almost weekly, a new auditorium was built in 1974 on property adjacent to the east side of the old auditorium and day school. Attendance the first Sunday, August 11, was 706.

The plans to start a summer youth camp were presented at the Watch Night service that year. Ten acres had been donated by a longtime member of Landmark for this purpose and Pastor Carter and members of the church began to clear the land on New Year's Day. The first camp session at "Camp Glory" was in August of 1975. Later the church had the opportunity to purchase 40 adjoining acres. Before the first payment was due, a member of the church paid the note. The camp now occupies 50 acres located a few miles northeast of the main church property. Junior Camp is held during the third week of June for 2nd - 6th graders and Teen Camp is held during the third week of July for 7th - 12th graders. Many young people have been saved or surrendered their lives to Christ through this outreach.

The Christian day school program was extended through the 12th grade by the start of the 1975 - 1976 school year. The summer of 1976 brought two miracles for our school ministry: 1) previously unavailable (and much needed) land adjacent to the east side of the main auditorium became available and 2) on one day, Sunday, June 6, $100,000 was raised to make the down payment on the property and build the gymnasium and classrooms.

In 1979, First Missionary Baptist Church's name was changed to Landmark Baptist Church. This change was based upon Proverbs 22:28.

“Remove not the ancient landmark, which thy fathers have set.” - Proverbs 22:28 (KJV)

During that same year, Pastor Carter was burdened to establish a college dedicated to the same principles upon which the church was founded. The college was originally housed on the property east of the main auditorium.

1979 also brought the start of an outreach program to the senior citizens of our area. Originally called Super Sixties, the Senior Patriots meet each Saturday from November through March for preaching, singing, fellowship and lunch. There are also opportunities to go on day trips to local attractions. This ministry encourages both physical and spiritual activity throughout the "golden years."

The radio ministry began in 1971 with a 15-minute question and answer series each Sunday morning on a local AM station. In 1973, Dr. Carter began broadcasting the morning worship service. In the early '80's the radio station came under new management and Landmark was forced off the air. The new station did not last long and was eventually purchased and given to Landmark through the generosity of one of our members. On April 6, 1986, WLVF (We're Landmark's Voice of Faith) began to broadcast at 930 on the AM dial.

Landmark Baptist Christian Retirement Village was started in 1985. The village property is on the west side of the church and includes 78 privately owned homes and a chapel where Bible studies and special events are held. 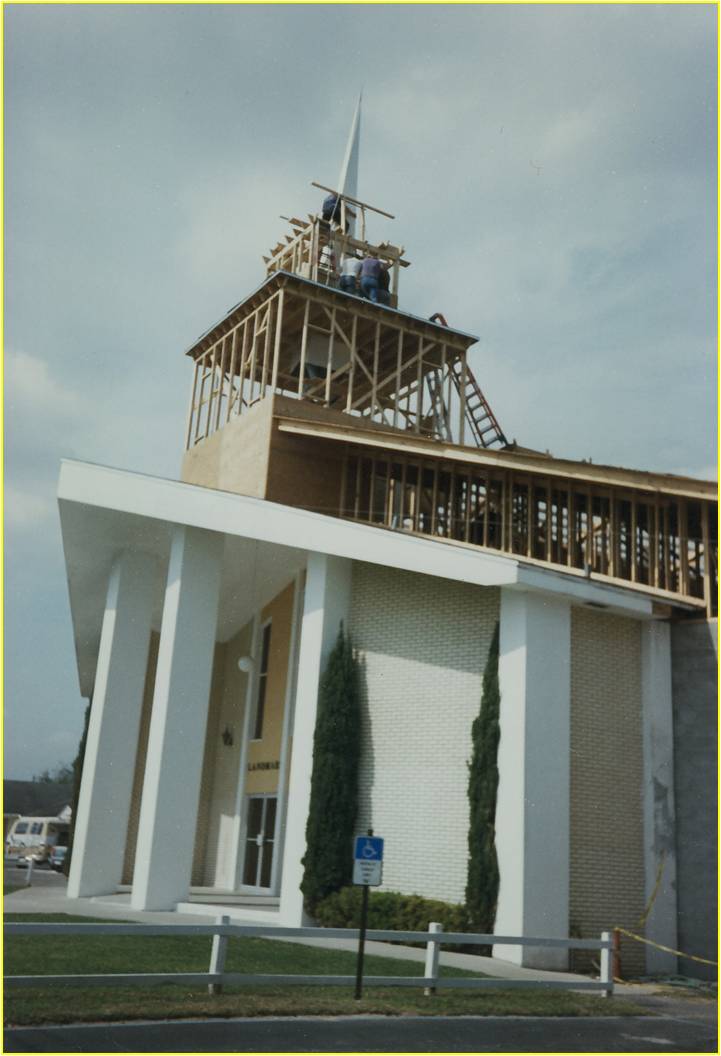 The balcony of the auditorium was extended in 1987 to accommodate the continued growth of the church membership.

In 1989, the church added a much-needed fellowship hall adjacent to the back of the auditorium which included a commercial size kitchen and cafeteria for the day school.

In 1990, the 90.3 FM frequency was added to the radio ministry, and Gospel 90.3 became a favorite in Central Florida.

The Spanish ministry was started in 1992, Iglesia Bautista Landmark.

As the Lord blessed and attendance continued to grow, the auditorium was once again enlarged to its current size in 1996. 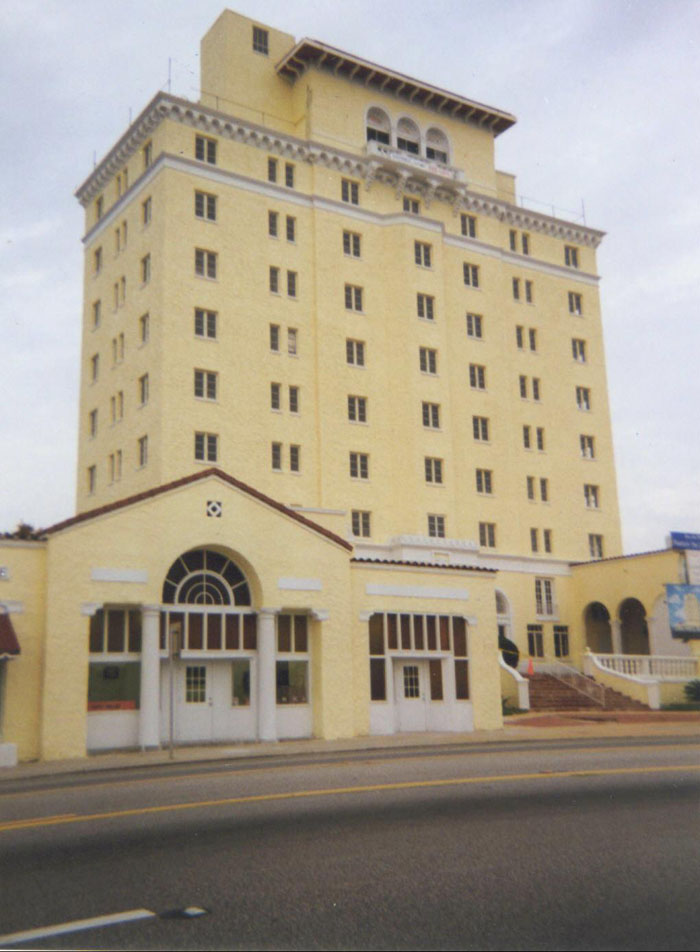 In 1997, Landmark Baptist College moved forward in growth and expansion. The historic, ten-story Palm Crest Hotel in downtown Haines City was obtained and renovated for use as a college campus. The radio station's broadcast studios were relocated to this property as well. The building is one mile west of the church facilities on Hinson Avenue. Since then, LBC has also obtained the two buildings of the former Holiday Motel (directly across the street from the Palm Crest Hotel) as well as the former First Presbyterian Church campus. These facilities have provided a greatly increased number of dorm rooms, classrooms, a beautiful chapel, Christian bookstore, social parlor, snack shop and recreation room.

In August of 2001, Gospel 90.3 began to broadcast worldwide on the internet at gospel903.com. This was done, in part, to enable many of our winter residents to listen year-round. It also provides an excellent source of good music for the missionaries supported by Landmark Baptist Church, most of whom do not have a conservative gospel radio station in their field of service.